On November 16, 1990 a new Christmas movie, which would go on to spawn four sequels, was released to massive success. Written by John Hughes and directed by Chris Columbus, Home Alone told the story of young Kevin McCallister who had to defend his home from blundering thieves after a family feud left him home alone at Christmas.

After 25 years, Home Alone is still considered one of the best Christmas movies of all time. But what are the stars of Home Alone up to now?

Macaulay Culkin was a very successful child actor with many notable movie credits including the role of Kevin McCallister in Home Alone and Home Alone 2: Lost in New York, Uncle Buck and My Girl until he retired from acting at age 14. In 2014 he founded The Pizza Underground, a New York-based band who re-work Velvet Underground songs into odes about pizza. The Pizza Underground toured North America that year, with two stops in Toronto at NXNE and Atomic Lollipop at the Ontario Science Centre.

Catherine O’Hara, who played Culkin’s mother in the Home Alone franchise, is currently starring in CBC’s hit show Schitt’s Creek. O’Hara also voiced Sally in The Nightmare Before Christmas, solidifying her spot in the Christmas Movie Hall of Fame, you know, in addition to Canada’s Walk of Fame.

The late, great John Candy had a small but crucial part in Home Alone as Gus Polinski, the Polka King of the Midwest, who gives Catherine O’Hara’s character a ride home. John Candy’s legacy lives on in our hearts and on our screens, but also in the newly opened John Candy Box Theatre at the Second City Training Centre in Toronto.

The Wet Bandits, played by Joe Pesci and Daniel Stern, were a not-so-dynamic duo who were outsmarted and overwhelmed by Kevin McCallister in Home Alone and Home Alone 2: Lost in New York. Joe Pesci has not been acting in recent years – when you take a paint can to the face you deserve a break! – but he recently voiced Mosquito in the animated feature Savva, Heart of the Warrior. Daniel Stern, who played Marv, has had numerous roles on television in recent years, and in 2012 played The Old Man in A Christmas Story 2, which was filmed in Vancouver.

Thankfully, we can relive the hilarity of Home Alone on Netflix, Shomi, or the original VHS that’s still kicking around!

Christmas was one of Walt Disney’s favourite holidays, and every year since Disney World was founded in 1971, the theme park has been transformed into a Christmas paradise. The parks are filled with fake snow, costumes, parades, parties and live holiday music. Disney World becomes every Christmas lover’s dream come true!

Have no fear if you can’t make it out to a Disney theme park this holiday season. With our help, you can easily turn your home into a special “Disney Christmas” wonderland without having to trek all the way down south.

Watch Disney Christmas movies, of course! Our absolute favourite is Mickey’s Christmas Carol. It was filmed in 1983, and marked the return of Mickey Mouse and friends in their first film after almost 30 years. This fantastic film is an adorable adaptation of Charles Dickens’ 1843 novel A Christmas Carol.

You have your Disney figurines, and your Christmas movies, now all you need is a little Disney Christmas music. We definitely recommend John Denver and the Muppets. This is the soundtrack to the classic holiday 1979 TV special, A Christmas Together. Not only is the music fantastic, but it will bring you right back to your childhood, sitting on your parents couch watching the Muppets Family Christmas, Elf or Gremlins each and every holiday.

“Well everybody that’s our show. Thank you for spending Christmas Eve at the House of Mouse. Here’s wishing everybody a Merry Christmas and a safe trip ho-home!” Mickey Mouse

Elf is a modern Christmas Classic that has something for everyone. Will Ferrell gives an incredibly funny and heartfelt performance as Buddy, a human raised by Santa’s elves on a quest to reconnect with his Father in New York City. We want to help everyone connect with their Elf-like Christmas spirit by revealing our top ten favourite lines from Elf!

9. You did it! Congratulations! World’s best cup of coffee! Great job, everybody! It’s great to be here. 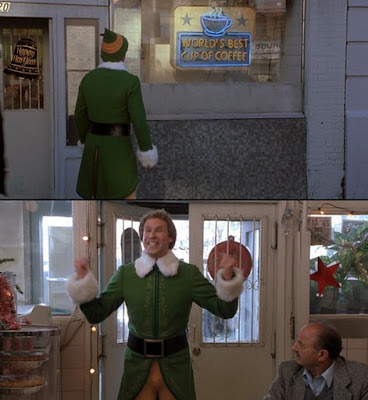 7. I’m sorry I ruined your lives and crammed 11 cookies into the VCR. 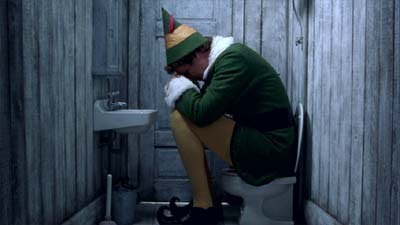 Show off your love of sugar with this T-Shirt! 2. Watch out! The yellow ones don’t stop.

Do you get this excited about Santa? Then this T-Shirt is for you!